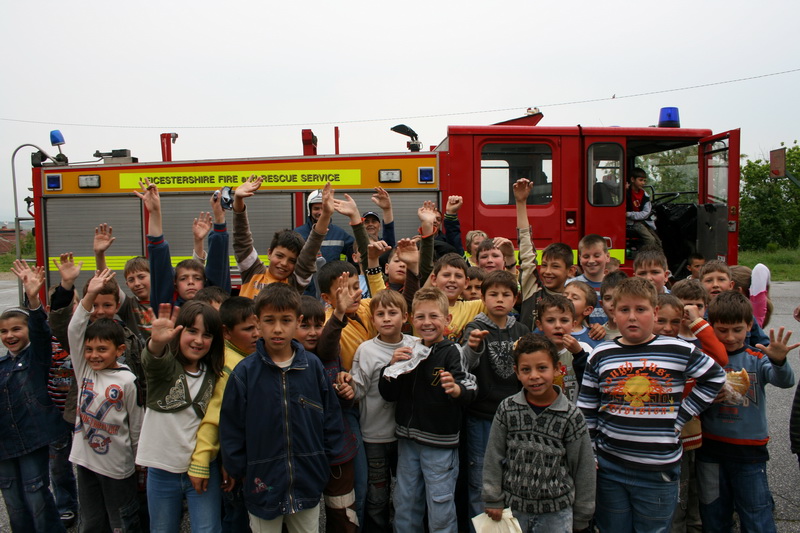 In May this 2008 the Operation Florian project team successfully delivered its first project in Macedonia.  A team consisting of members from Grampian, FRS, Suffolk FRS, Greater Manchester FRS, North Wales FRS, Lancs FRS, East Sussex FRS and Northamptonshire FRS delivered a project which was worked in three regions on the country simultaneously.

In support of the decentralisation process in Macedonia Operation Florian developed project regions to deliver equipment and training in; City of Skopje, the municipalities of Gostivar, Veles and Sveti Nikole.

The overall objective of the project has been to establish operational and training standards throughout out the whole of the country.  But due to a fragmentation caused by the long term decay of the national firefighting structure after independence and further reinforced by the decentralisation process, there was a need to begin rebuilding locally.

Recent changes and independence have severely cut back the finances of the fire and rescue service leaving it in a situation with extremely reduced national funding and a lack of awareness locally as to how such a service can be utilised to great affect.

By delivering a project in three ‘pilot’ regions Operation Florian has demonstrated that there is capacity to rebuild and re-equip fire and rescue services and demonstrate through a consistent training programme that there is an opportunity to develop national standards which can improve services locally.

Over the courses of two weeks Breathing Apparatus, Road Traffic Collision training and pump and ladder training occurred.  By the end of the two weeks over 115 firefighters had received training in one or both of these training areas in 5 Municipalities spread across the country.

A final over arching aspect of the project was to develop a relationship with the Directorate of Protection and Rescue (DPR).  The DPR have a legislative responsibility for the establishment of national occupational and training standards for the fire and rescue service.  Two consultants were employed to provide an analysis of the DPR and to begin the process of providing a vision and strategic direction to the DPR to assist the organisation in the delivering its legislative duties.  A final report detailing recommendations to provide a basis of focus was written and delivered.  The foundations of this work is intended to begin to form the back bone of further project work locally.

I would like to express my sincere thanks to all the supporters who given up their time to raise the funds, all of the members of the team who worked incredibly hard not only raising the profile of the charity in Macedonia through their efforts but gave people an exceptionally enjoyable 2 weeks.