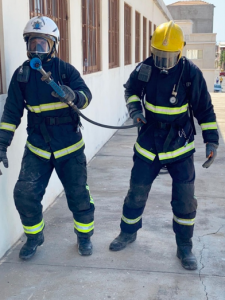 Cape Verde is an archipelago situated off the western coast of Africa. São Nicolau is one of the 10 islands that make up Cape Verde with a population of approximately 12,800 residents. The fire service on São Nicolau is limited, consisting of 30 volunteer fire fighters, who only have access to basic fire fighting equipment.

The Operation Florian team set off from Manchester in November 2019 to start the two day journey to São Nicolao. On arrival in São Nicolau, the team were greeted at the port by the Vice President of the island, the Chief of the volunteer bombeiros (fire service) of São Nicolau and the Chief from the island of Maio, who was assisting in the training.

On the first day of training, the team were taken to a local municipal site where they met 25 volunteer fire fighters, the team handed over and demonstrated the donated equipment which included BA, PPE and Road Traffic Collision (RTC) sets. The group of 25 volunteers received 6 full days training on road traffic collisions and breathing apparatus.

The RTC and BA instructors set different scenarios that would challenge the volunteers and made sure they could practice what they had been learning. For example, the team were able to get access to a derelict flat, where the BA instructors were able to run scenarios in a real life setting. This, combined with the intense heat, made the training both tough but realistic for the volunteer firefighters. The training team were happy with the progress of the volunteer firefighters and they were very enthusiastic and willing to learn, asking lots of questions.

At the end of the training the delegates carried out a final demonstration to showcase the use of the equipment and their new skills. The scenario consisted of an RTC involving two vehicles, one of which was on fire, and two casualties. The volunteer firefighters were split into crews and each crew had a task to perform. One crew was tasked with extinguishing the vehicle fire to allow the other crew to perform an extrication of the trapped casualty and snatch rescue of the other casualty. This was supervised by the project team.

During their time in Cape Verde it became apparent to the project team that São Nicolau would benefit greatly from having access to a fire appliance. The volunteer firefighters now have access to various different rescue equipment, but they have no way of transporting it, or a crew to an incident. Volunteer firefighters would have to carry equipment to an incident themselves, or travel in a personal vehicle, if one was available, this is not ideal during any incident requiring a prompt response from the fire service.

The project team wish to thank everyone who participated in the charity events and made donations, in particular Barbara Walton, Chaplain for Tameside and Emma Dean, GMFRS Research and Evaluation Officer who both supported a number of fundraising activities.