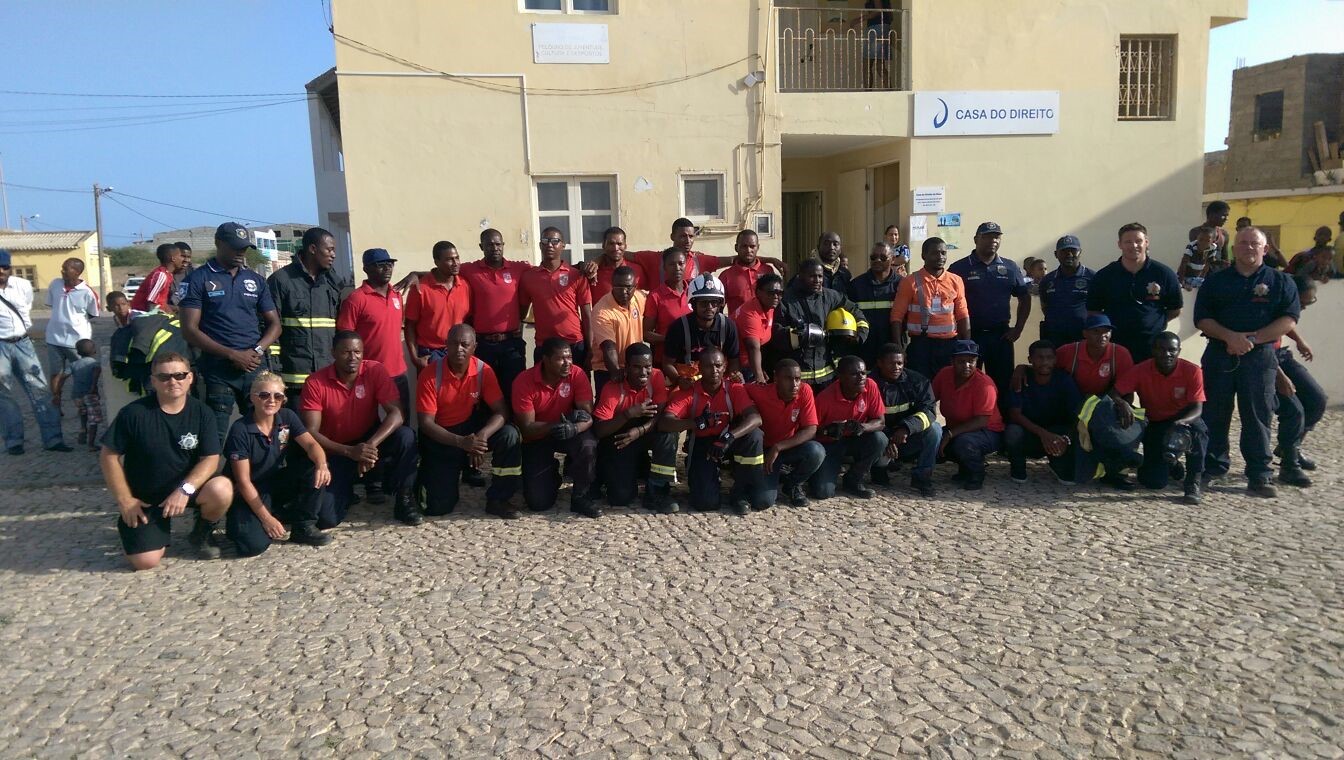 On the 8th May the team assembled in Manchester with two members travelling hundreds of miles first just to get to Manchester (Gaz from Denmark and Danny from Scotland). After the introductions and welcomes the team set off for Manchester airport to start their 2 day Journey to Maio Cape Verde.

On arrival in Maio the team were greeted at the airport by Chief Bombeiro Elvio who on the way to the team’s hotel gave them a small guided tour of the town Port Ingles.

After checking in at the small hotel the team were then taken to the municipality to meet the President of Maio. They introduced themselves and the President welcomed them to Maio. He hoped that a good strong partnership could be made to enable more projects to take place in the future.

The group of 30 volunteers were split into two groups. One group would be starting training on pumps and ladders the other group would start breathing apparatus training. It was challenging to say the least trying to pass the information over through a translator but they managed and then it was off to the airport to start practical training.

The pump and ladder group where there  and all the bombeiros took turns pitching the ladders. Meanwhile the BA group was introduced to a BA set and they all took turns in donning all the PPE and a BA set and going under air.

The BA group had started to learn about self-protection and how to move around a smoke filled compartment safely. Each volunteer bombeiro had a turn at being blind folded and searching either left hand or right hand through the engine house of the airport fire service.

After a long day practising and then practising again the team finished for the day and went back to the hotel.

The next four days the team carried out the training which was slow to start with but as the days went on got better and better. Hose was being run out and pumps introduced as well as carrying on pitching ladders and in BA the group was introduced to casualty handling techniques.

As the week went on the training became more challenging for the volunteer bombeiros with Gaz and Danny introducing branch tactics as well as pumping drills.  Paul and Jo took their group to the disused villa close to the airport and had the bombeiros doing left hand and right hand searches through different doors as well as wearing full fire gear, BA sets and using live casualties which really did make it tough for them.

After four days of intense training and passing on as much information as possible the groups changed so that everyone got the chance to use pumps and ladders as well as training in the use of BA.

The next four days were the same as the last only the groups had changed. The team were happy with the training progress and the volunteer bombeiros took on board the training. They were very enthusiastic when taking part.

On the final day the bombeiros put on a demonstration in the village so that all the locals could see what they had been learning over the last two weeks.

Once the demonstration had finished the crowd gave a loud cheer and much applause, the bombeiros felt very proud and were all very excited. Chief Elvio had everyone fall in for parade, he brought them to attention and then thanked them for their hard work over the last two weeks and thanked the team for the training. He also thanked operation Florian for their involvement and for the generous donation of the fire appliance and the equipment.

The following day Elvio picked the team up around dinner time and took them to the airport where they were to meet with the president to discuss how training had gone and how he could support the volunteer bombeiros in the future. The team explained to the president that they now need a lot of support from him to develop as a fire service to which he agreed. The president also asked that a strong partnership to be built between Operation Florian and Maio so that the bombeiros would benefit from more training and that Maio would be a safer place in the future especially when tourism reaches the island and it starts to grow.